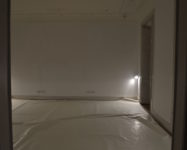 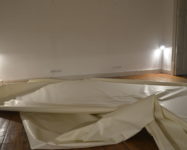 Pavel Janák, theoretician and we could say the founder of Czech Cubism in architecture compares the creative principles of nature and artistic effort on the example of fabric that is widely used by artists throughout history. Drapery, warped material as a result of artistic effort. Analogy is artists is forming material through his imagination into the final form of the work. Natural forces can mold and shape the material like artists with the difference that in the case of natural effort is the result kind of self-explanatory. Janak first describe drapery in his essay from 1912 and he was talking about drapery like it is something very interesting and suggestive. Drapery is another artistic form that Janak uses as a metaphor for the artistic intervention into matter. It is the material visually transformed by movement into which the action has been integrated. He said that drapery represents the most dynamic possibilities of material. So if something happened to the material, some force is applied it became drapery, the higher form of material. In drapery, as in sculpture, this action is transformed into the abstract “erection of content” and the quality of movement is transformed into an optical quality. In case of this installation it is important process itself. Black box, not in artistic therm but more like computer science term, represents here the force which affect drapery. Black box is device with input – output system without knowing what kind of processes is happening inside. Its not nature force, nor force produce by artist, we can think about it more like automated force, the artificial energy is here wrapping a material. Even this device was created by artist, its full autonom entity and its more close to the nowadays experience. Another aspect of this work is its apparent interactivity in relation to the viewer. The pure form of material at the beginning occupies the gallery space at the expense of the observer. Since it is a controlled process with a clear beginning and a certain end, there is a relationship between the quantity of folds, bare gallery space and a number of spectators who may enter the space. The work is not directly dependent on the audience, interactivity is rather symbolic. This means that in case of their absence force still affect the material. But then the whole process becomes rather the Forgotten dream.